A PIECE OF THE SAHARAN AFRICA AMIDST THE ATLANTIC

Fuerteventura, the so called “beach of the Canary Islands”, has been declared in its totality Reserve of the Biosphere by the UNESCO. It stands out for having mild reliefs and being the oldest island of the archipelago from a geological point of view. With an average annual temperature of 21.1º C and a subtropical climate, the island is just perfect for your vacations. The winter is mild and the summer just lovely, its beaches are quite a spectacle. Situated less than a hundred kilometers away from the African coastline, this island of unique desert landscapes is characterized by over 150 kilometers of white sand beaches and crystal-clear waters. It is a piece of the Saharan Africa amidst the Atlantic, as wrote Miguel de Unamuno. Its sea breeze, loaded with negative ions, makes us completely relax as soon as we foot Fuerteventura. You will feel like on another planet. 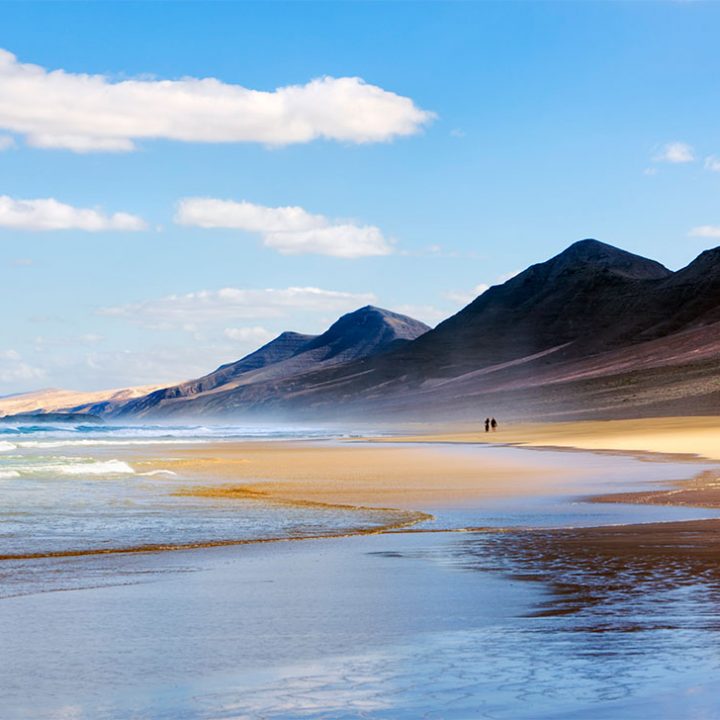 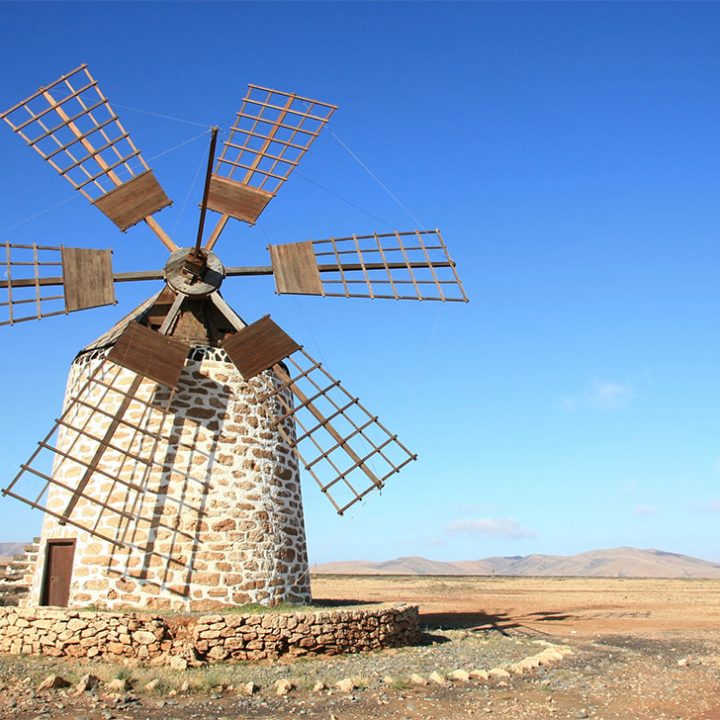 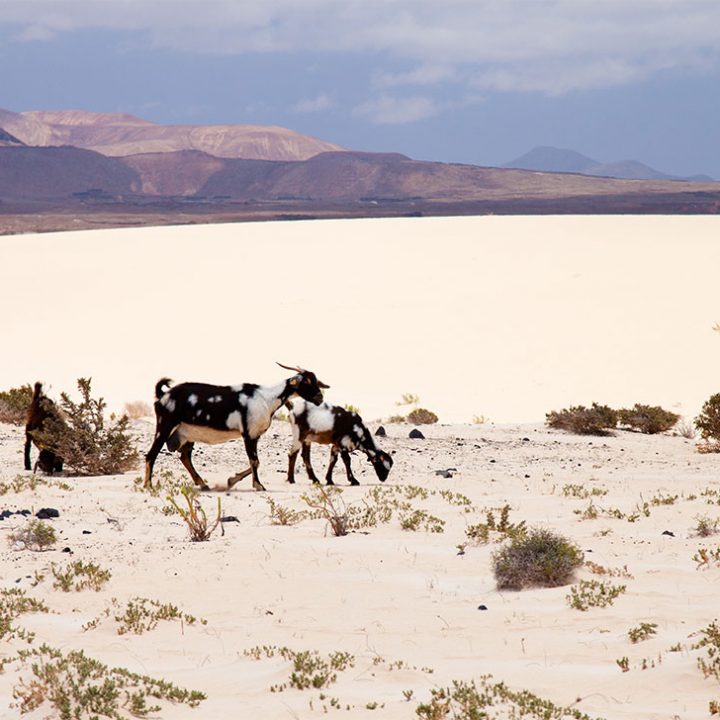 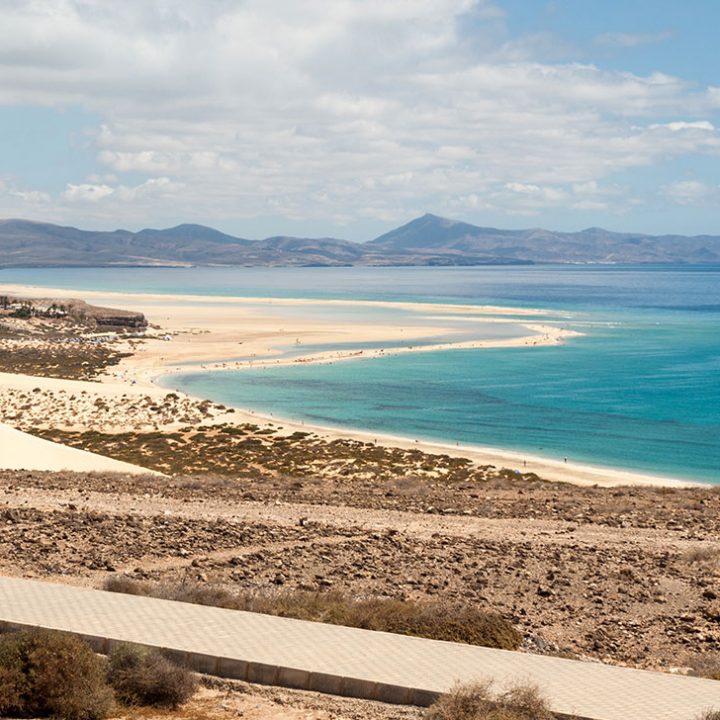 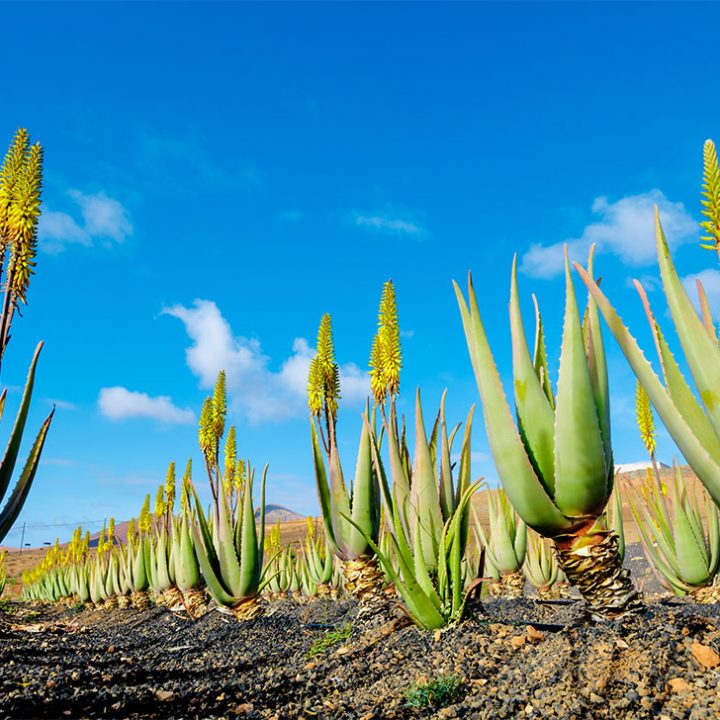 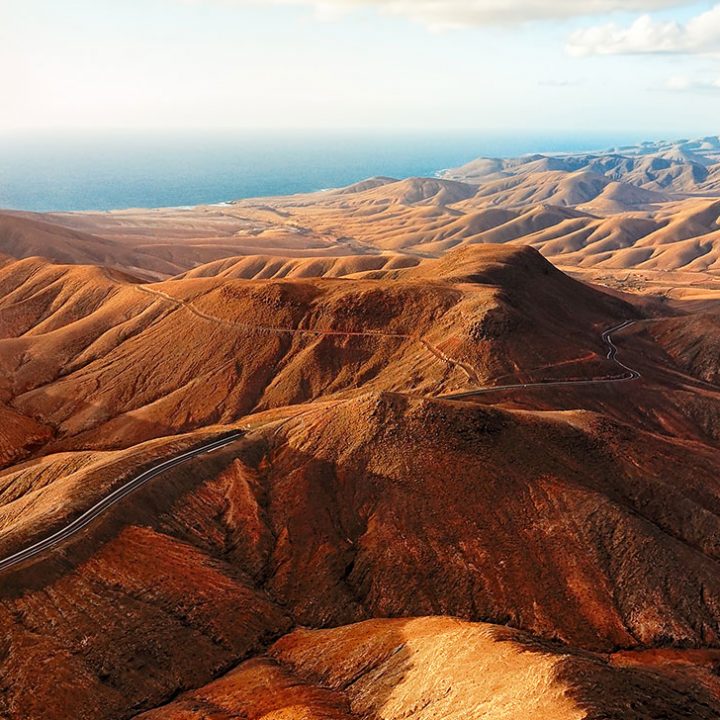 Declared in its totality Reserve of the Biosphere, Fuerteventura is the oldest island of the archipelago from a geological point of view.

MUCH MORE THAN SAND AND WATER 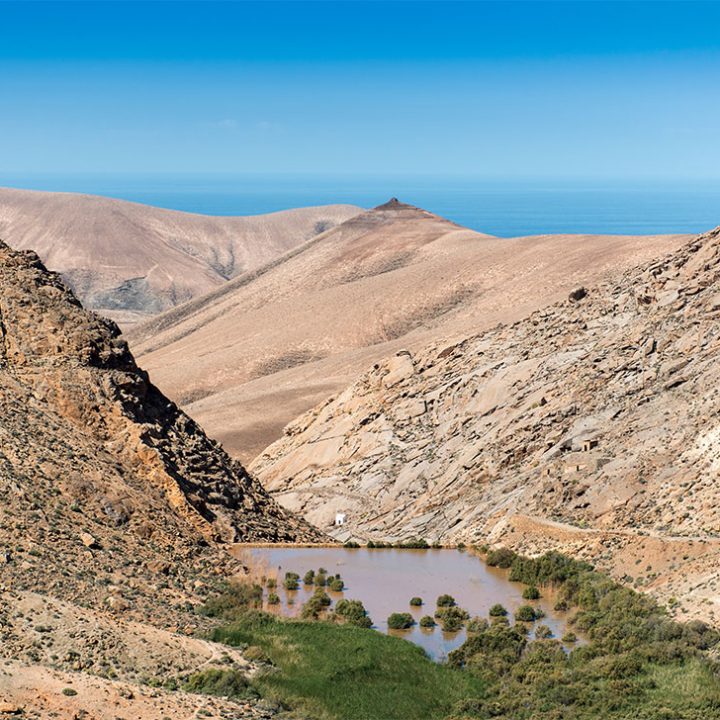 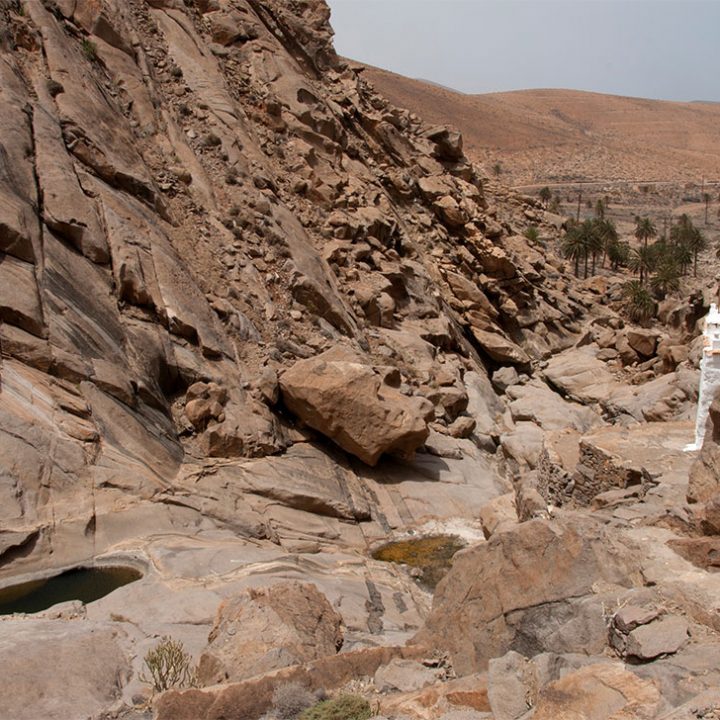 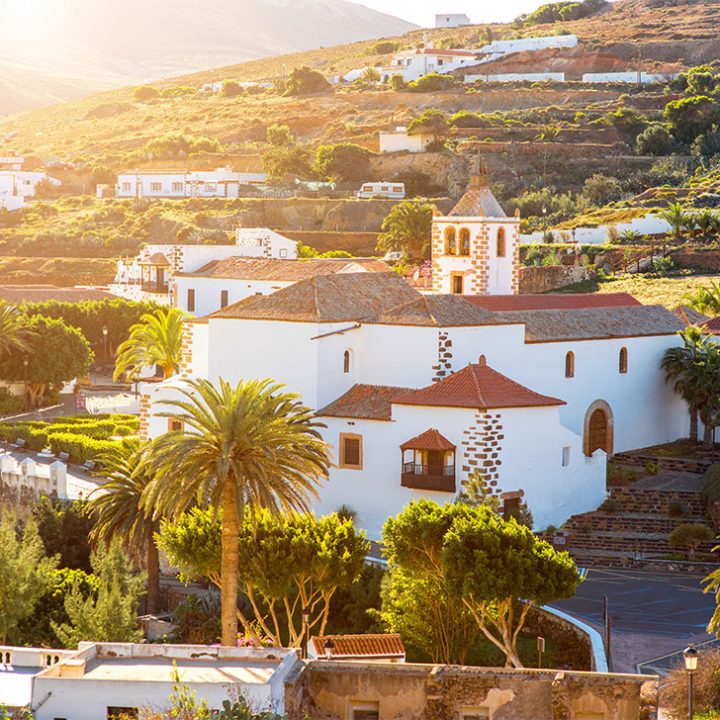 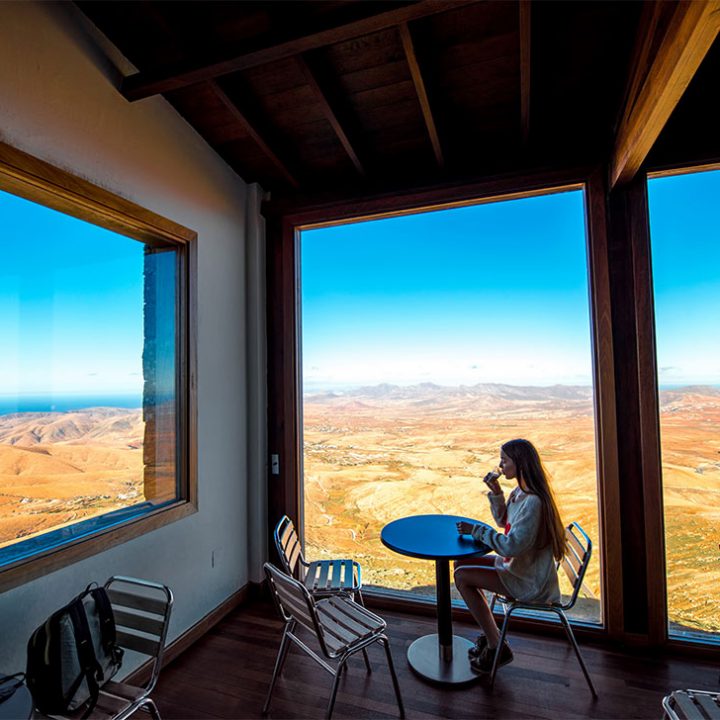 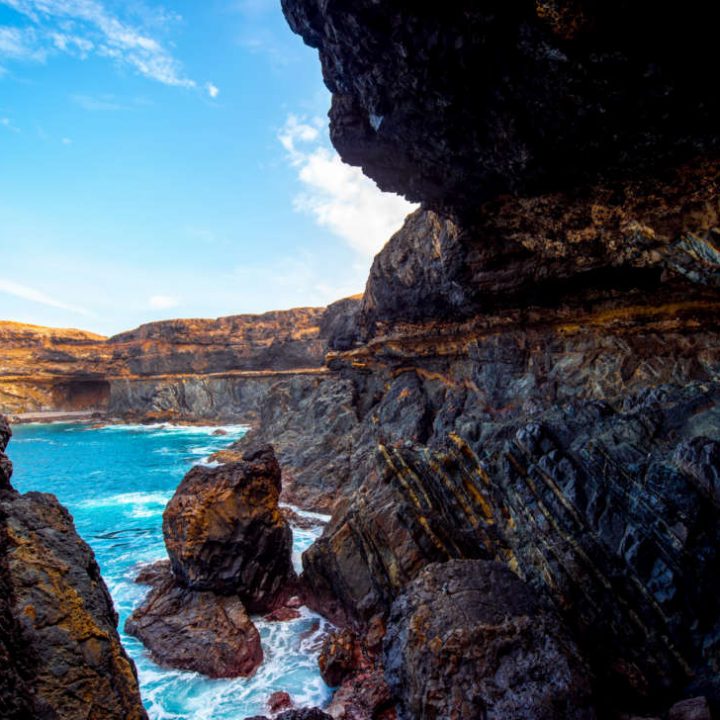 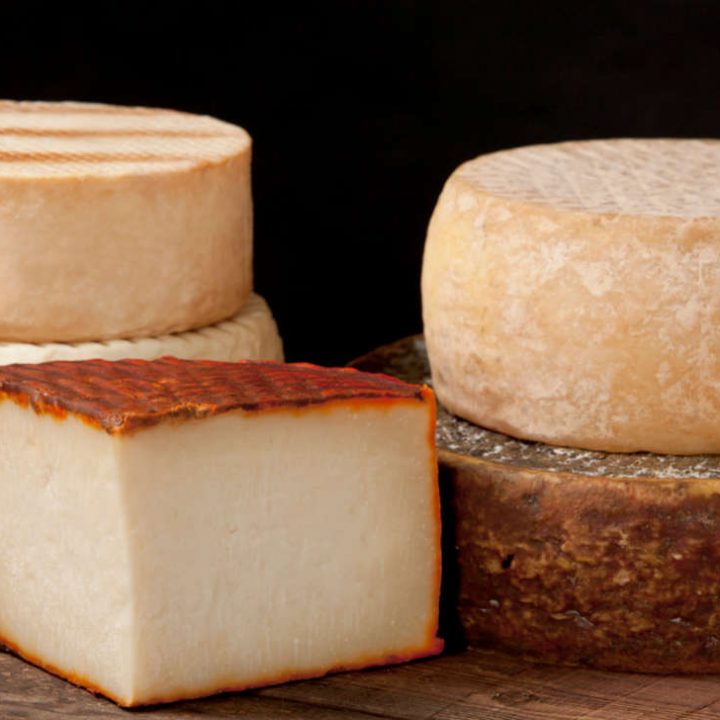 Fuerteventura is not just sand and sea. Fuertenventura is also gastronomy. Fuerteventura´s cheese is the ambassador par excellence of the island´s gastronomy. Made with Fuerteventura´s goat milk, its designation of origin is recognized since 1996.
However, to the surprise of many, the so called “beach island” hides in its inland a world no one could ever imagine existed in this apparently flat landscape.
The fishing villages of El Jablito or El Cotillo, or the village of Betancuria (former capital city of the island), will delight all those who wish to get to know the island in depth and discover picturesque spots. Precisely, in the natural area of Betancuria, you will find Barranco de las Peñitas (i.e. ravine) one of the most interesting spots on the island. The ravine lies on one of Fuerteventura´s most beautiful trails, travelling through the villages of Vega de Río Palmas and Buen Paso, and reaching the spectacular Ajuy with its famous caves, where pirates and corsairs traded. Apart from discovering an unusual landscape, you will find a dam and slim palm-trees on the laps of the Barranco de las Peñitas, thus creating a green refuge in the middle of a desert. The ground water that flows under the ravine emerges to form a little lake that is defined by the native flora. And in the very same ravine lies the beautiful chapel of Virgen de la Peña (i.e. Madonna), Fuerteventura´s patron saint that gives her name to this place. No doubt, this spot has become a place of worship for hikers and climbers. The island´s heart hides rocky formations of syenite that were born from the basaltic magma and look like nestled islets in the middle of the land, thus creating the perfect scenario for bouldering. Designed by César Manrique, Morro Velosa lookout point invites us to enjoy from above the immensity of this landscape of arid beauty and get to know the geological past of the island. A sensational picture.

WIND AND SUN FOR SPORT LOVERS

It´s a good time to take your board and glide over Fuerteventura´s water. The long and sunny days, the intense wind and the waves up to two meters high make this island be known internationally for surfing, windsurfing and kitesurfing. Corralejo, Majanicho, Sotavento or El Cotillo are just a few examples of spots you might visit if you are a water sports lover. No wonder, over and over Fuerteventura is hostess of the World Championship of Windsurfing & Kiteboarding.
Obviously, the island invites us to practice a lot of other activities, such as travelling by byke or jeep, or discovering its spectacular sea bottom by snorkeling or diving. 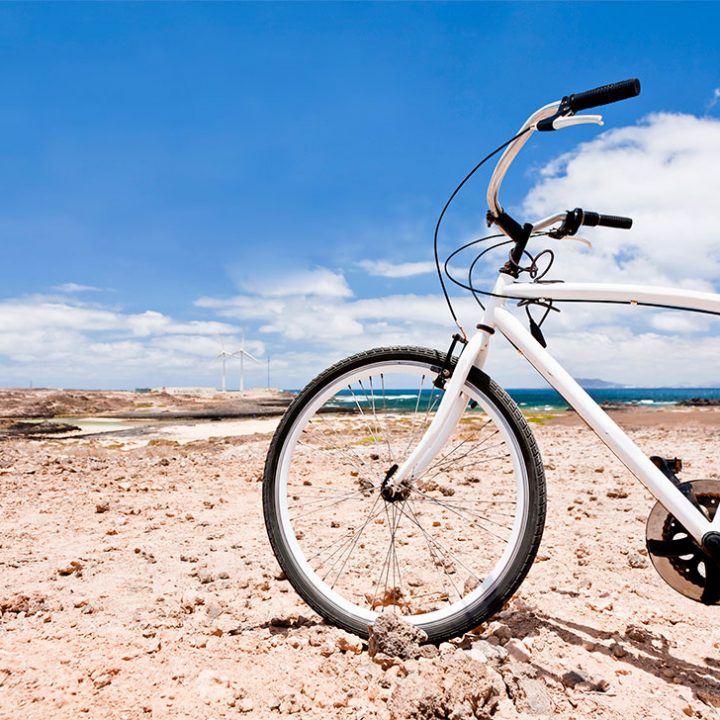 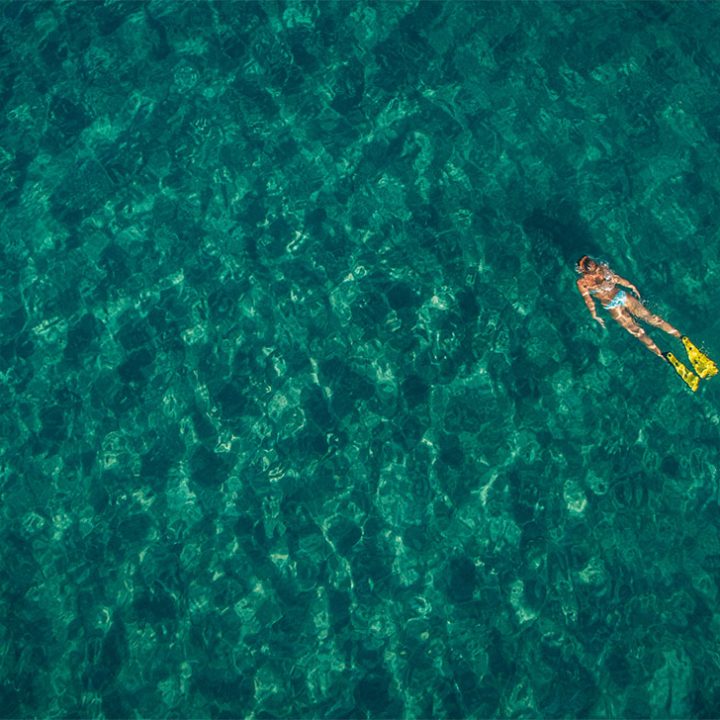 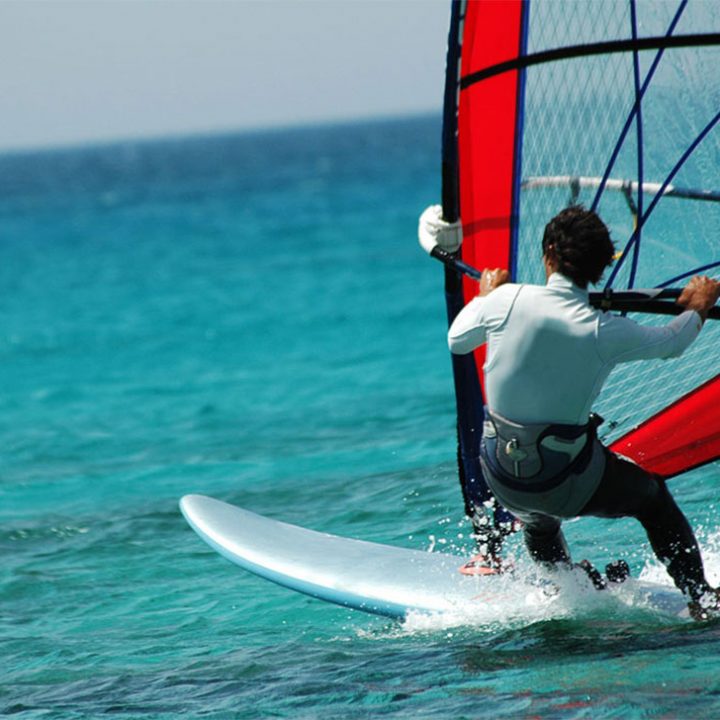 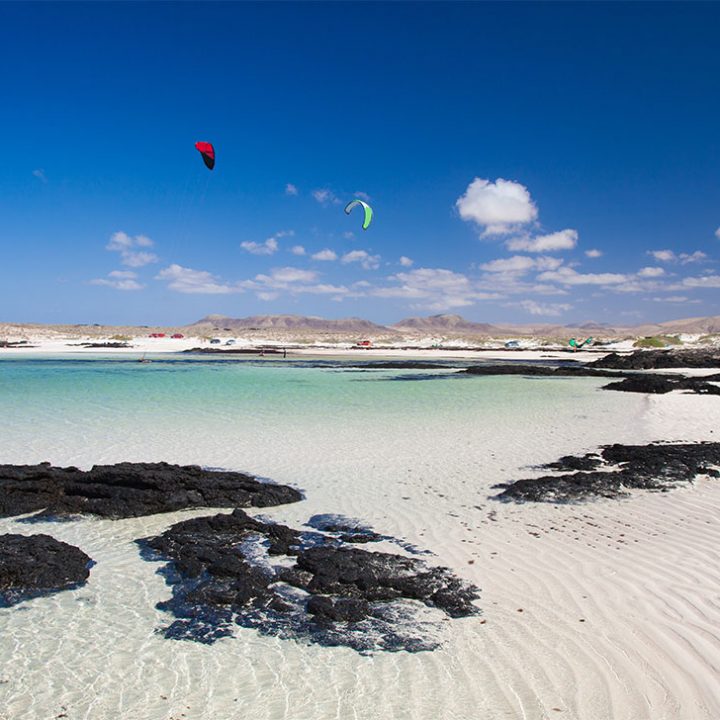 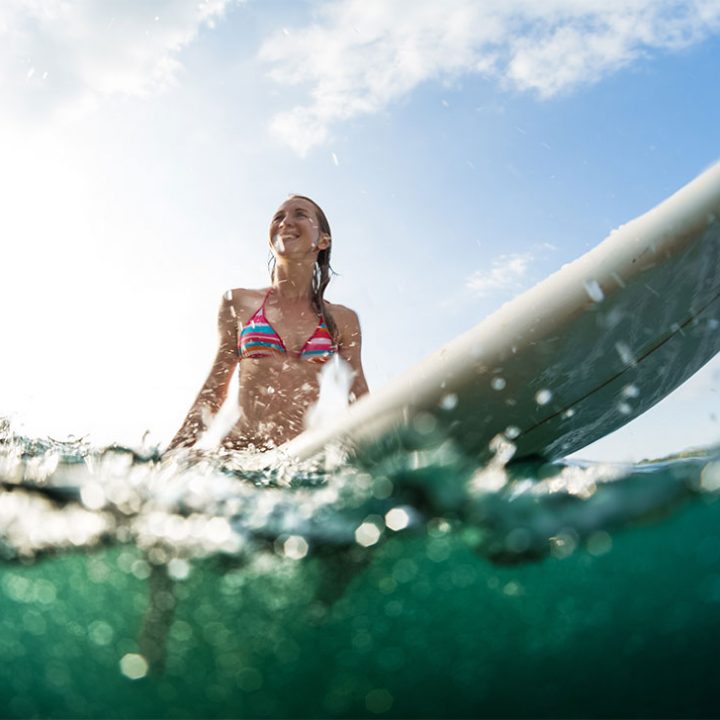 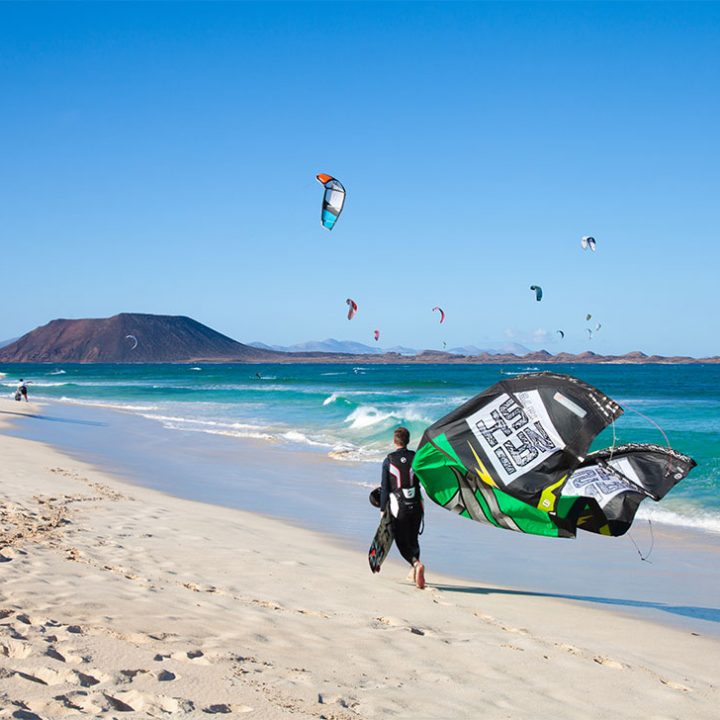 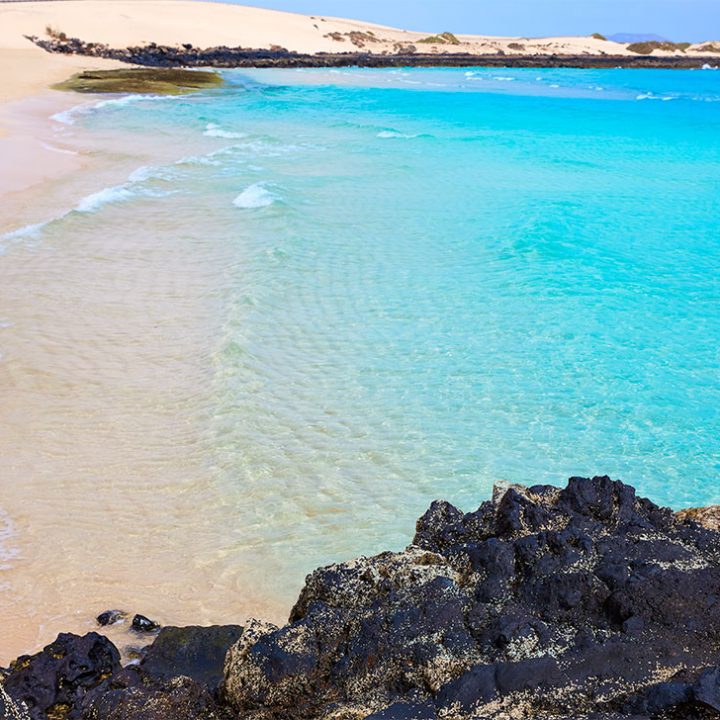 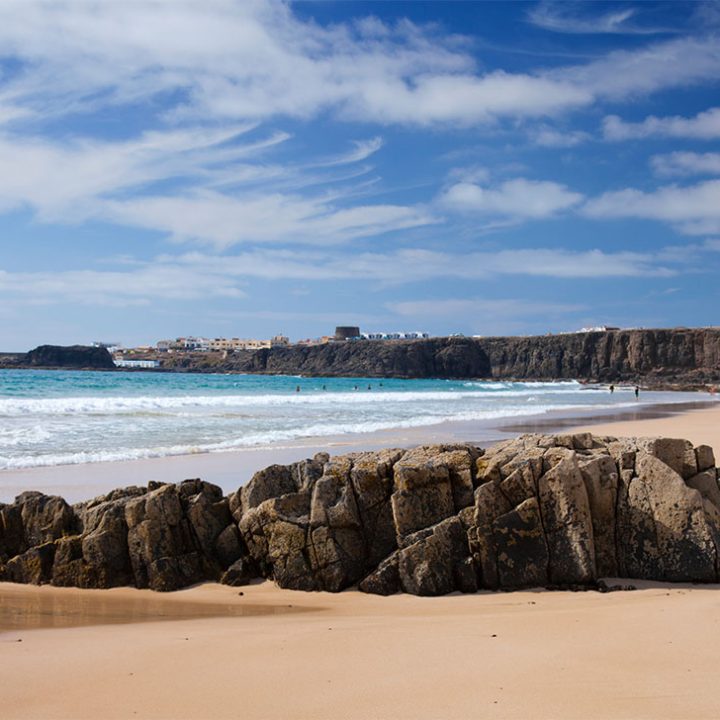 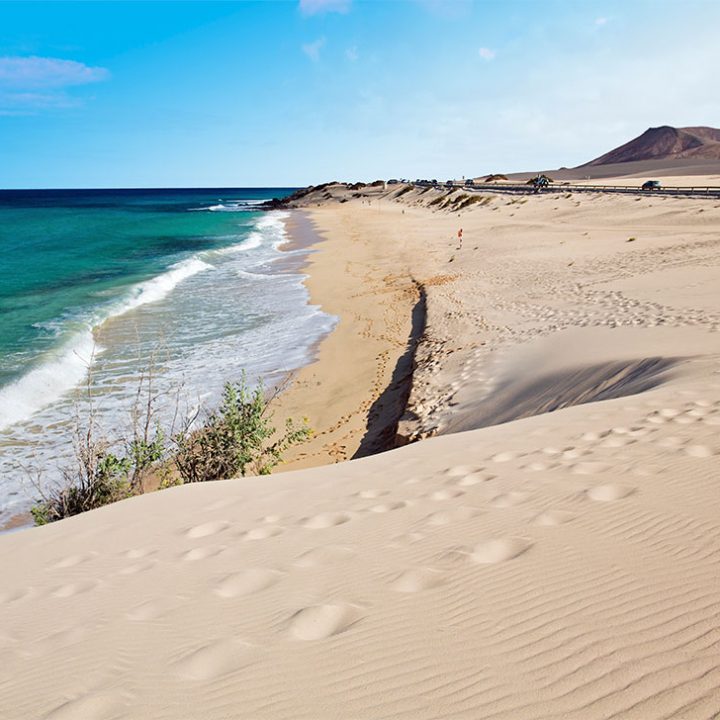 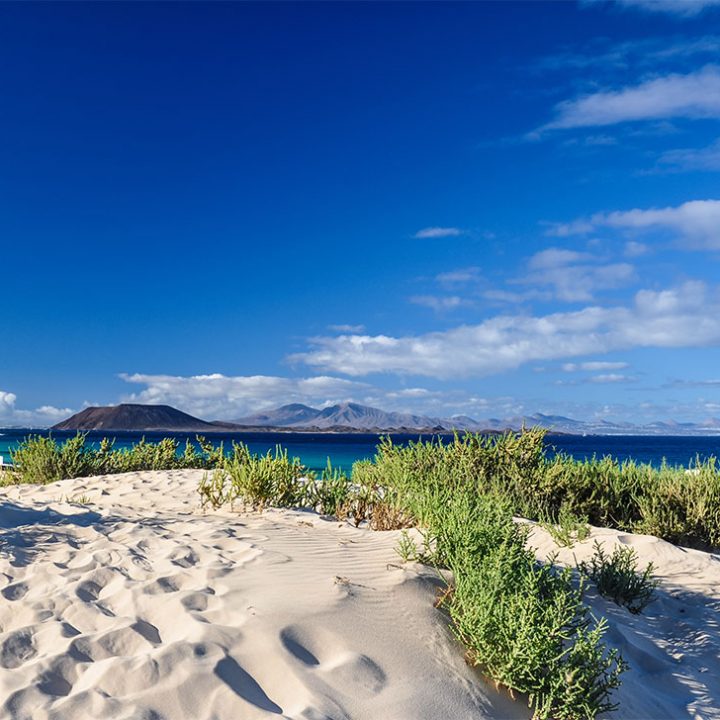 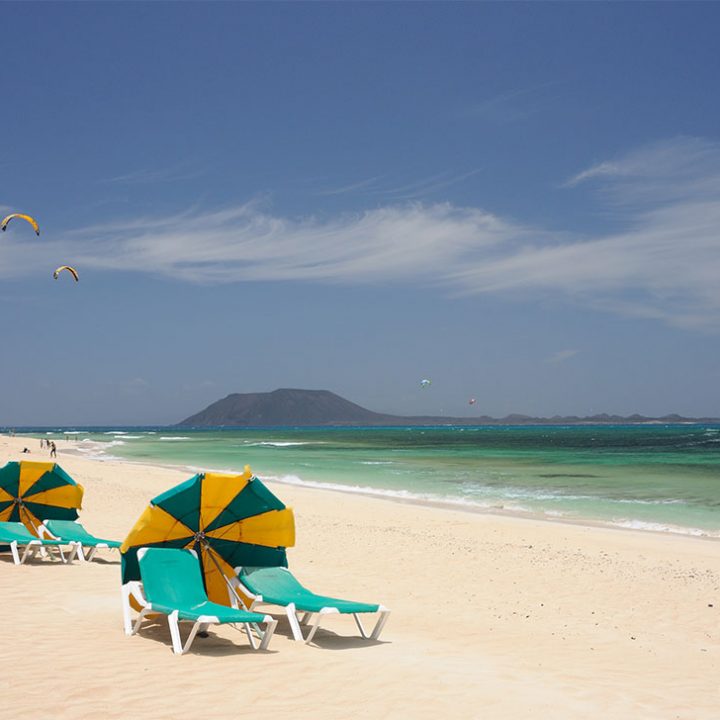 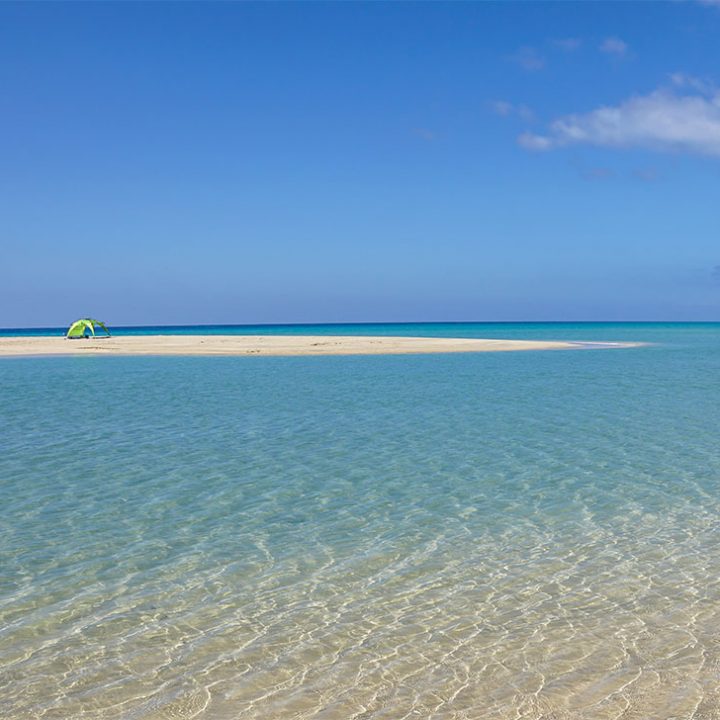 Definitely, it is a privilege enjoying beaches and marinas that not only possess the Canarian natural beauty, but also highlight for their quality. Fuerteventura´s coastline, over 340 km long, gives us virgin beaches, wild water and big waves beaches, calm sea beaches and sandy lakes, and charming fishing villages. In Playa Blanca, Los Pozos, Butihondo or Morrojable the prestigious Blue Flag waves. In the municipality of La Oliva, where you will find our Risco del Gato Suites THe Senses Collection, the Grandes Playas, La Concha (Chica), el Charco de las Agujas and Corralejo Viejo (La Goleta) have been also awarded. Quite a luxury, don´t you think?

Any doubt or request?

We will be pleased to help you out.
CONTACT US